You can download the original, working jupyter notebook here

Wilson and Cowan, in the seventies, developed a dynamical systems approach to the study of the large-scale behaviour of neuronal population. Their approach doesn’t mind the behaviour of single neurons, but works at the level of population firing rates (roughly, the number of neurons that fire in the unit time) for two subpopulation: the inhibitory neurons and the excitatory neurons.

If you’re interested in Wilson and Cowan’s model, keep reading. If you came here to see some Python code, skip to the numerical solution.

We are concerned only with the behaviour of populations rather than individual cells.

The cells comprising such populations are assumed to be in close spatial proximity, and their interconnections are assumed to be random, yet dense enough so that it is very probable that there will be at least one path (either direct or via interneurons) connecting any two cells within the population. Under these conditions we may neglect spatial interactions and deal simply with the temporal dynamics of the aggregate. Consistent with this approach, we have chosen as the relevant variable the proportion of cells in the population which become active per unit time. […]

There is one final and crucial assumption upon which this study rests: all nervous processes of any complexity are dependent upon the interaction of excitatory and inhibitory cells.

Spatial interactions are discussed in a subsequent paper by the same authors.

Getting to a system of equations

In the rest of the post, we will call $E(t)$ and $I(t)$ the istantaneous firing rates, at time $t$, of the excitatory and inhibitory populations respectively. The point $(E=0, I=0)$ should not be interpreted as the state where the activity is completely dead, but rather as the resting state of the network, as we will require it to be a stable fixed point.

To construct a meaningful model, we slowly incorporate the relevant biological assumptions. When does a neuron fire? In the simplest models, two conditions need to be fulfilled:

Therefore, if $r$ is the length of the refractory period, the fraction of neurons that satisfy condition 1 at time $t$ is:

and similarly for the inhibitory subpopulation.

To see if condition 2 is fulfilled, we need the total input to the subpopulation, which is $c_1 E(t) - c_2 I(t) + P(t)$, i.e. a weighed contribution from the excitatory population, a corresponding negative contribution from the inhibitory neurons, and an external input $P$. Then, the neuron responds non-linearly to this input. We call $S_e$ the response function, also called the input-frequency characteristic of the excitatory neurons, and correspondingly $S_i$ for the inhibitory ones.
Now, it’s not only the instantaneous behaviour that counts: a spike can still help eliciting a new spike in a downstream neuron even a few milliseconds later. So the probability of being excited at time $t$ is proportional to

Both in (1) and (2) we can get rid of the integrals and multiply the stimulus by a constant describing the length of the time influence instead, if we are interested in the coarse grained temporal behaviour of the activity, i.e. we focus on variations at a timescale slightly longer than the refractory period $r$ and the “characteristic length”, which we call $k$, of the function $\alpha$. So, finally, we can say the activity at time $d + dt$ depends on the simultaneous fulfillment of conditions (1) and (2): \(E(t + dt) = (1- rE(t))\, S_e(kc_1 E(t) - kc_2 I(t) + kP(t))\)

After all these approximations and assumptions, by turning the equation above in differential form and appropriately rescaling $S_e$, we reach a system of coupled, nonlinear, differential equation for the firing rates of the excitatory and inhibitory populations, which constitute the Wilson-Cowan model.

Now, we want to numerically solve the equations above, regardless of their meaning. We will choose some values of their parameters, and some initial conditions, and plot the behaviour of the solution in the state space and in time.

To represent the nonlinear behaviour of neurons, we use a sigmoid function, dependent on two parameters $a$ and $\theta$:

For a stable limit cycle and a stable fixed point

This is a tricky part. To view the stationary points, which are an important property of a dynamical system, we need to study the points where the derivatives of $E$ and $I$ are zero, i.e., where the function called WilsonCowan is zero. Since it’s highly nonlinear, we have to do that numerically.

Numerical root finding basically works by taking an initial guess, then following the shape of the function until we reach a zero. If we want all of the zeros, we need to try many initial guesses, and we are not guaranteed to succeed.

In practice, it seems fast enough to use all the points of the grid I’ll use for plotting, and compute a zero for each of them. But this may not always work.

Here is where we actually integrate the dynamical system in time. Try changing the values of E0 and I0 to obtain different paths in the phase space. 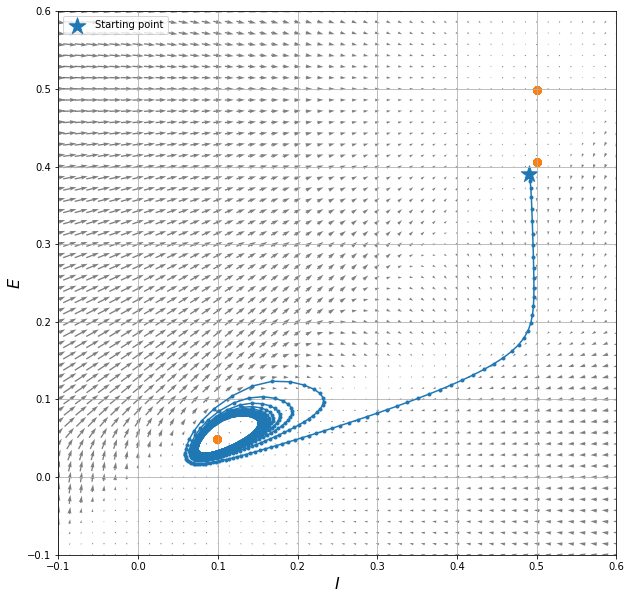 We can see the system exhibits:

The different nature of the stationary point, and the consequent influence they have on the behaviour of the solution in their neighbourhood, is due to the eigenvalues of the system when linearised near that point. Refer to a textbook for that!