Instead of paying attention to the current talk, I’m going to spend some time writing up some of the things I picked up from this morning. Then I’ll use this file to take further notes. This, again, is just what I managed to pick up and understand.

For a lot of the talks of the first sessions, what I could follow properly was the research question being posed, and a lot less so for the answers to those questions. Anyway, a few points just to get a feeling of the topics:

Brent Doiron (Pittsburgh; his name, we learned, is almost impossible to pronounce properly) presented some deeply theoretical work about variability, balanced networks, dimensionality, and slow inhibition. I confess I couldn’t follow the details; in fact, I’m not even sure I understood what he meant by variability. If I understood correctly, one of the problems addressed was that realistic inhibition time constants are slow, so that in balanced network models one ends up into a Synchronous Regular phase, which is unrealistic, as Donald Trump himself noticed (according to Doiron): 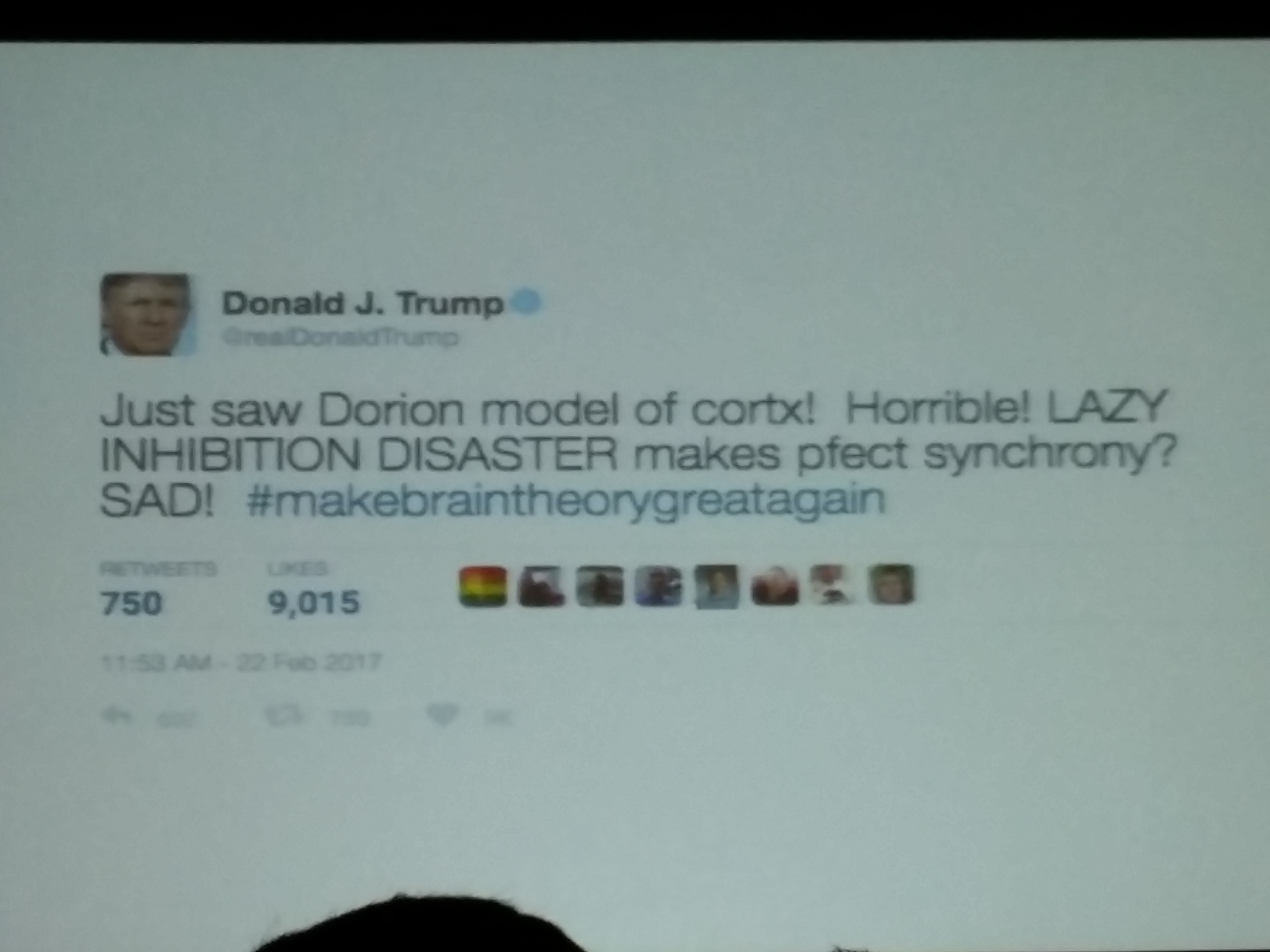 The workaround that lets us keep a slower inhibition is using a non-trivial local form of connectivity. The resulting model has a quite complicated phase diagram. Most of the work presented is contained in papers in press or in preparation, but some is already in “The spatial structure of correlated neuronal variability”, Nature Neuroscience 2017.

Marius Pachitariu’s (Gatsby, UCL) talk was the one I understood the best today. It revolved around the question of whether the activity of a large neural population can be actually described as low-dimensional or is irreducible. In other words, if I do a Principal Component Analysis of the activity of 10 000 neurons, how many principal components do we need to describe a good amount of the variance? Dozens? Or thousands?

And yes, he does have a way of measuring from 10 000 cells at the same time, with calcium imaging and two-photon microscopy: this is done by sacrificing temporal resolution (down to ~3 Hz). The results: 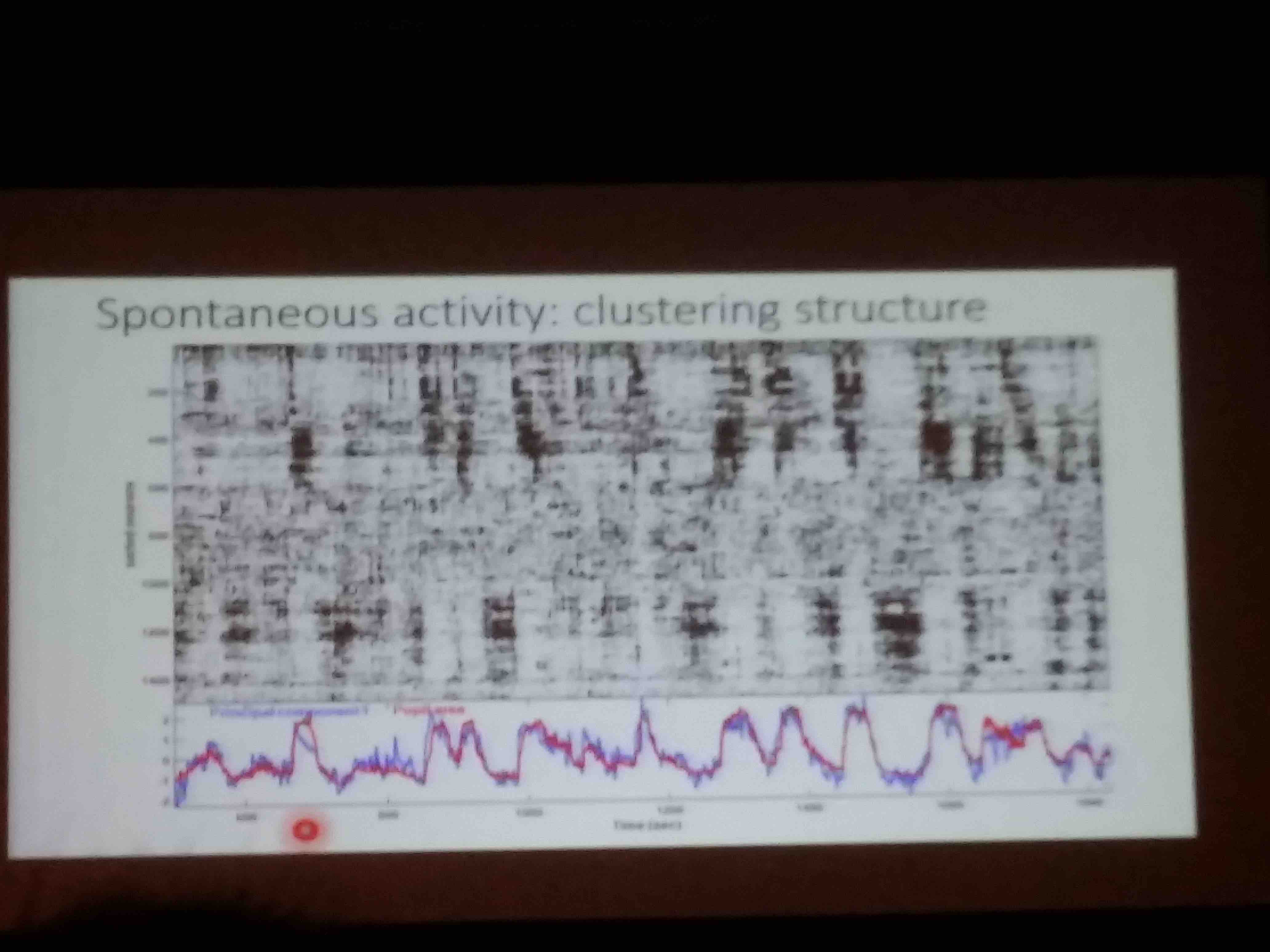 Wei Ji Ma is amazing. And not because he graduated in physics at 17 and got his PhD at 22. Because he decided to make his experience as a scientist open to anyone, for younger students and scientist to benefit from it. He talked for an hour about the struggles he had to face during his academic career, in an extremely sincere and humble way. He talked about his problem with procrastination, with impostor syndrome, with bad student-supervisor relationships with multiple PIs, with changing subject from physics to neuroscience, and all that. He made the audience do the same, and be open about their problems as humans doing science. Interestingly, he organised an entire seminar series, at NYU and occasionally elsewhere, where he asks other senior scientists to share their experiences.

I didn’t take any notes during these sessions, sorry!

I was extremely tired, I confess I could hardly understand anything at all. A few topics I saw here and there:

Enough for today, again there would have been a lot more to learn, but this is what I managed to absorb. Goodnight!